In my humble opinion, "Basic Mode" is definitely better than "Advanced mode" if you can find a good route with "Basic Mode".

Should I use the basic mode and set the better node near game server location?

My answer is yes or no. :-) Please check How to pick the best mudfish node for game I play? section first. Depending on game characteristics (e.g. restricting a region to connect), you should change mudfish nodes.

Should I use advanced mode and set one node near here and the other on game server?

My preference is 'Basic Mode' first. If you can't see any beneficial by using the basic mode, you can try to use 'Advanced Mode'.

What is the advantage of connecting to the game through two Mudfish nodes over one?

Please note that you don't use two mudfish nodes (advanced mode) if your connection is enough stable and okay to access to the game server. Definitely there's pros and cons for advanced mode than basic mode

How to pick the best mudfish node for game I play?

There is no easy answer for this question. Depending on the internet status (at your ISP, mudfish node or game server ISP), the result could be very vary. However the general method to pick a mudfish node is as follows:

What's nodes for having PBE characters on the title?

PBE is a word of League of Legends; short for Public Beta Environment. It points that nodes are for testing the beta features of Mudfish problem. So please note that these VPN nodes are

Where can I look the recommended paths for items?

Please visit the following site to see shortest paths calculated based on your recent RTT information.

How do I get the updated routing paths?

Unfortunately at this moment it's no way to update it manually. It's one of tasks I should fix. However these update event is triggered:

But please note that these update processing should be delayed depending on how RTT calculation server is under load.

What does System Load mean?

Do I have to restart my game whenever I choose a new node?

Yes I think so if you already connected to the game. If not connected yet you don't need to restart the game.

Less traffic or more traffic is better for a node?

It depends on the network capacity of each mudfish nodes. However unfortunately each mudfish node has different network bandwidth. So even if a node has a high traffic, you can still get a smooth response from the node if it doesn't hit the limit of bandwidth.

Which a mudfish node is best to connect the China game server?

If you'd like to connect the game server locates at China mainland, please remember the following things when you pick a mudfish node:

How to pick a mudfish node for china game server?

Most important thing is RTT stddev between mudfish nodes and the game server. This information is available when you click "the magnifier icon" found at the item configuration after enabling Expert Mode. 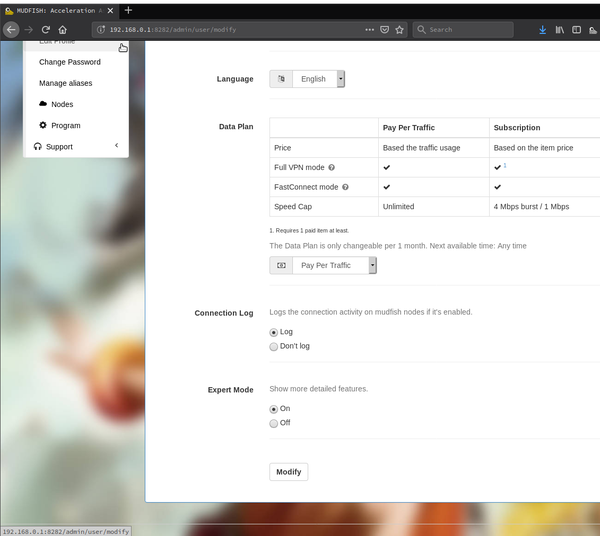